My interest in building guitars began as a young teenager, encouraged by the guitar I owned being hard to play and sounding quite dead.  With tools at my disposal and some experience at making things, it got me thinking that I could make a guitar that sounded and played better than that, so I looked for and  found a book on “Building Your Own Guitar.”  I built the forms for side bending, but abandoned the project when I realized the book did not address the neck reinforcement rod, a key issue with my first guitar.

Years later the only steel string guitars I owned were an Ovation and a cheap wood guitar.  Neither of them inspired the imagination, and the Ovation was dead and hard to play, even with low action.  In the late 90’s I came upon a Luthier at Dollywood in Sevierville Tennessee, Johnny Rushing, who could build guitars in his sleep.  After visiting with him at the park every chance I got, and asking a thousand questions on guitar building, I began building my first guitar in early in 2001. At the time I had no intentions of making lutherie a habit or career, but after making guitar number two that had a killer sound, I was hooked and have been building ever since.

I have been to several of Charles Fox schools for building techniques and advanced design; Ervin Somogyi’s week long voicing class, and have utilized a number of other training venues to study lutherie.  Influencers in my craft include: Johnny Rushing, Charles Fox, Ervin Somogyi, Kent Everett, James Olson, and Scott Van Linge.

There are a number of things I enjoy about making guitars.  One is client interaction, dreaming up something together, providing progress pictures, getting feedback, and of course at the end, hearing their remarks when they get to play their guitar for the first time.  The second thing I enjoy about the process is the art side of it.  Even my first guitar was embellished a little for additional beauty.  And yes, creating something that has a sound that inspires and causes you to want to continue to play.

I have been asked a number of times if I use an apprentice or if I do all the work myself, including finishes and sunbursts.  Yes, I do all of the work myself and finishing is one of the many skills I brought with me into the craft.  The exception is that I partner with a custom inlay company to cut custom inlays with a CNC where that makes sense. 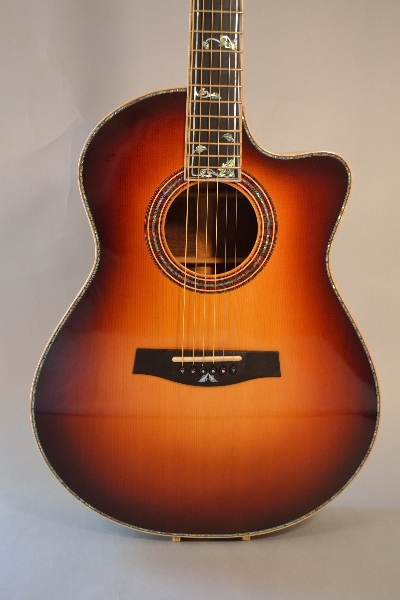